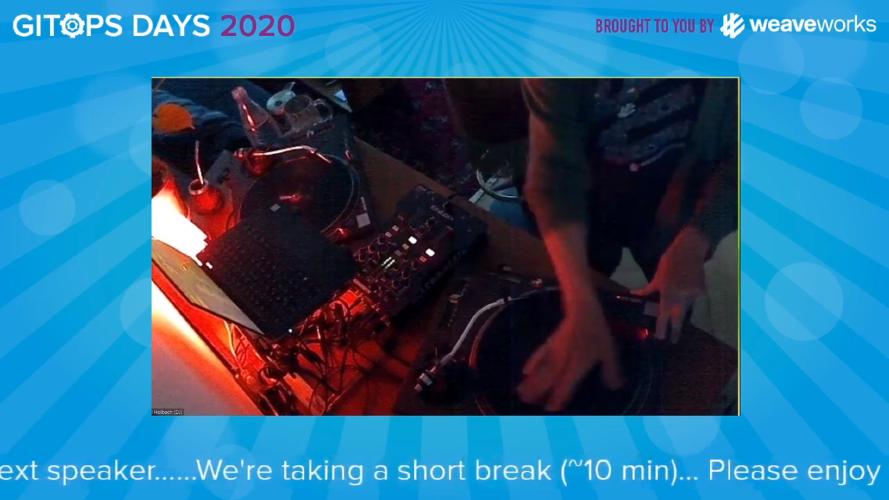 What a brilliant day 1 of GitOps Days it was. Weeks of hard work from a great team went into this, as was quite apparent. Minor glitches, some last minute shuffling of speakers, but apart from that very very seamless. (You can still sign up and get links to the recordings.)

I had a bit of an unusual role: I was DJing at an online event.

Some questions online were about the setup and why I wasn’t changing records during playing (well spotted!). So here’s what I used during the event:

I’ve used this setup for a long time and it’s rock-solid. Having played real vinyls for years, I just never updated my muscle memory to use a CDJ or any other fancy new controller. At some stage I just had to move on from buying records every weekend or two to digital - there’s just so much more stuff out there and you don’t suffer as much from tracks (and records catching dust) that you find to be quite short-lived.

On the transmission end, I was very lucky that Lucijan (one of my besties) gave me his Windows laptop (in use for making Windows builds of Sitala - their free drum plugin and standalone app). I needed it because we used Zoom (as in zoom.us) for transmission and only the Windows or Mac versions of Zoom offer the “Original Sound” option where your sound is sent “as-is”, which you very much want when you’re playing live music. I also used his Zoom H4n recorder as an external soundcard.

To get a better view of what I’m doing, I mounted an external webcam on an USB extension on a broomstick (yeah I know, very professional!). The webcam was the piece of equipment that most urgently would need replacement. It didn’t really cope well when it got darker here in Berlin (it was 23:59 here when day 1 ended) and I had to add additional lighting. Also the disco ball didn’t come out quite as well as I wanted.

All in all, I had a great time supporting the event and look forward to day 2. The vibe was incredible - the audience was super friendly and had great conversations. I also learned that one of the speakers, Vuk Gojnic (Deutsche Telekom), used to be a DJ in the past and we’re losely planning to play at an event near you when this pandemic is over. We also had somebody who used to VJ in the late nineties. I love interactions like these - so diverse interests apart from GitOps.

Today I’ll also make sure to move and sit a bit more during the times when I’m not playing. I was standing most of yesterday.

One thing that was asked for as well was a playlist. Looking at this I’m quite surprised how much I managed to play on day 1.

Please join us for day 2 of GitOps Days - the schedule just looks great. I look forward to seeing you there! 💞

We have two beautiful days of GitOps sessions and content lined up for you. Tomorrow will be day 1, so if you haven&rsquo;t signed up yet, head to https://www.gitopsdays.com/ and register there! Here&rsquo;s an overview of the sessions of both days. There&rsquo;ll be time to ask questions and get to know everyone and everything. We&rsquo;re very much looking forward to seeing you there! Day 1 - May 20, 2020 Please note that the times are in Pacific Time.

I&rsquo;m very much looking forward to GitOps Days 2020 on 20th/21st May (next week). It will be a great opportunity to learn more about GitOps concepts and tools, see demos, ask questions, have a great time and meet other people who are in the space as well. We have some excellent speakers lined up (and are still adding a few more): Kelsey Hightower (Google) Javeria Khan (Palo Alto Networks) Kyle Rockman (Under Armour) Carlos Sanchez (Adobe) Taylor Dolezal (Independent) Cornelia Davis (Weaveworks) Vuk Gojnic (Deutsche Telekom) Alexis Richardson (Weaveworks) Stefan Prodan (Weaveworks) Register at https://www.

Time flies when you&rsquo;re having fun: it&rsquo;s now been two years since I started working at Weaveworks and I 💕 the experience it&rsquo;s been. Back then I was just concluding my sabbatical and had started pursuing a second career in that year. So my mind wasn&rsquo;t exactly in the tech space, still I felt rested and open to new challenges. In the meantime, many old friends had already waved over from Cloud Native land and tried to lure me there.