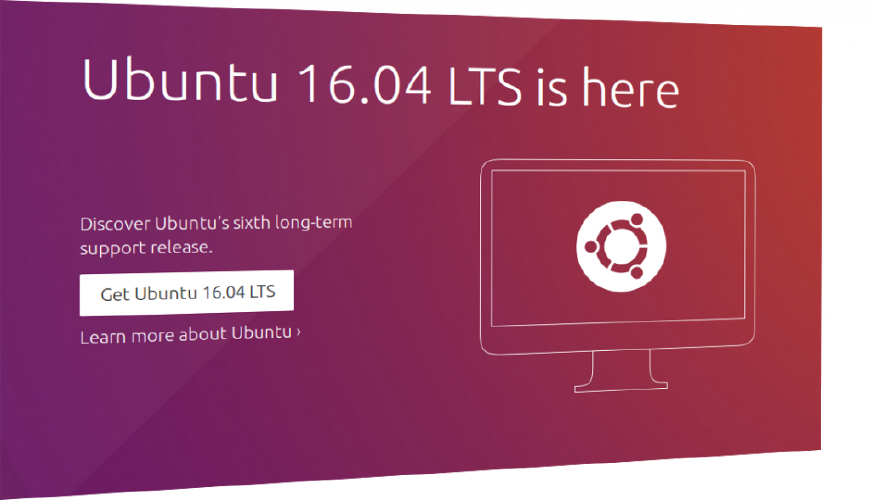 Ubuntu 16.04 LTS, aka the Xenial Xerus, has just been released. It’s incredible that it’s already the 24th Ubuntu release and the 6th LTS release. If you have been around for a while and need a blast from the past, check out this video:

Click here to view it on youtube. It’s available in /usr/share/example-content on a default desktop install as well.

You would think that after such a long time releases get somewhat inflationary and less important and while I’d very likely always say on release day “yes, this one is the best of all so far”, Ubuntu 16.04 is indeed very special to me.

Among the many pieces of goodness to come to your way is the snapd package. It’s installed by default on many flavours of Ubuntu including Ubuntu Desktop and is your snappy connection to myApps.

Snappy Ubuntu Core 2.0 landing just in time for the 16.04 LTS release only happened due to the great and very hard work of many teams and individuals. I also see it as the implementation of lots of feedback we have been getting from third party app developers, ISVs and upstream projects over the years. Basically what all of them wanted was in a nutshell: a solid Ubuntu base, flexibility in handling their app and the relevant stack, independence from distro freezes, dead-simple packaging, bullet-proof upgrades and rollbacks, and an app store model established with the rise of the smartphones. Snappy Ubuntu Core is exactly that and more. What it also brings to Ubuntu is a clear isolation between apps and a universal trust model.

As most of you know, I’ve been trying to teach people how to do packaging for Ubuntu for years and it continued to improve and get easier, but all in all, it still is hard to get right. snapcraft makes this so much easier. It’s just beautiful. If you have been doing some packaging in the past, just take a look at some of the examples.

Landing a well-working and stable snapd with clear-cut and stable set of APIs was the most important aspect, especially considering that almost everyone will be basing their work on 16.04 LTS, which is going to be supported for five years. This includes being able to use snapcraft on the LTS.

Today you can build a snap, upload it to the store using snapcraft upload, having it automatically reviewed and published by the store and Desktop users can install it on their system. This brings you in a position where you can easily share your software with millions of users, without having to wait for somebody to upload it to the distro for you, without having your users add yet another PPA, etc.

So, what’s still missing? Quite a few things actually. Because you have to bundle your dependencies, packages are still quite big. This will change as soon as the specifics of OS and library snaps are figured out. Apart from that many new interfaces will need to be added to make Ubuntu Core really useful and versatile. There are also still a few bugs which need figuring out.

If you generally like what you’re reading here, come and talk to us. Introduce yourselves, talk to us and we’ll figure out if anything you need it still missing.

If you’re curious you can also check out some blog posts written by people who worked on this relentlessly in the last weeks:

Thanks a lot everyone - I thoroughly enjoyed working with you on this and I’m looking forward to all the great things we are going to deliver together!

Bring your friends, bring your questions!

The Community team moved the weekly Ubuntu Community Q&A to be tomorrow, Friday 2016-04-22 15:00 UTC on https://ubuntuonair.com as usual. If you have questions, tune in and bring your friends as well!

The world of Snappy at UbuCon Summit

I&rsquo;m very excited about UbuCon Summit which will bring many many Ubuntu people from all parts of its community together in January. David Planella did a great job explaining why this event is going to be just fantastic. I look forward to meeting everyone and particularly look forward to what we&rsquo;ve got to show in terms of Snappy Ubuntu Core. We are going to have Manik Taneja and Sergio Schvezov there who are going to give the following talk:

It&rsquo;s been a while since our last Snappy Clinic (here&rsquo;s a link to all videos) and since Ubuntu Online Summit a lot of great things happened in Snapcraft: Summary of changes in Snapcraft 0.5 Summary of changes in Snapcraft 0.6 Among the changes: a nil plugin, support of pip packages, support globs in the copy plugin, a nodejs plugin, add go-packages to the go plugin, countless bugfixes and tests, a more beautiful interface and more documentation.

Ubuntu Online Summit featured more than 70 sessions this time around and quite a big turnout. You can find the full schedule with links to session videos and session notes in summit.ubuntu.com. Here&rsquo;s a quick summary of what happened in Snappy Ubuntu Core land: Testing Snappy: In this Show &amp; Tell session Leo Arias showcased a lot of the QA work which has been done on Ubuntu Core along with many useful techniques to run tests and easily bring up Snappy in a number of different scenario.