(This trip report was brought to you by the Canonical Community team, i.e. Alan Pope, Daniel Holbach, David Callé, David Planella, Michael Hall and Nicholas Skaggs. Some individual posts might still pop up in the next days… :-))

For a few years, the Californian LoCo team has been involved in SCaLE and held an UbuCon at the event or an Ubuntu-themed day and always an Ubuntu booth. Because of the immense popularity of SCaLE and the level of planning which went into this year’s UbuCon, the Community team decided to get involved and make this the first ever UbuCon Summit. For a few weeks we had regular meetings, brought on sponsors, got many speakers involved, flew many contributors and Canonical employees to the event and made a lot of noise about it in general.

SCaLE 14x happened from 21-24 January and on the first two days (Thu+Fri) we held our UbuCon Summit. There was Mark’s keynote, a few plenaries, a number of interesting talks and an unconference in the second half of Friday.

We registered about 200 Ubuntu enthusiasts (very likely much more drive-by audience) at the event and between sessions everyone had a lot of hallway conversations. The single-most heard sentence during the entire event was “It’s great to see you.” - UbuCon Summit brought together many community members who hadn’t seen each other for quite a while or who had never met. Many used the opportunity to catch up, to fix bugs together, bring each other up to speed on things and talk to people in the audience. For example the local Snappy team (Sergio, Oliver, Daniel, Didier) look at some small bugs together, help the Mycroft people with some snappy questions and answer questions of interested users - one particular success story was that it took two minutes to turn the project of a developer who talked to us into a snap.

Mark’s keynote was well-received and helped many of the audience to understand Ubuntu’s and Canonical’s vision. Many were excited about the new possibilities with snappy and snapcraft. In general there was a lot of interest in convergence and snappy - to many it wasn’t quite clear what the timeline is, what this would mean for the Ubuntu they were using right now and how far we’ve already come.

The unconference saw quite a few concurrent sessions and we got a number of work-items out of them:

There were many events in the evenings: the Pre-UbuCon Meet and Greet, the UbuCon Thursday Night Party, Bad Voltage Live and more. It was a great opportunity to meet all friends of Ubuntu in one place, catch up with previous Canonical employees and others.

Other keynotes and notable talks: 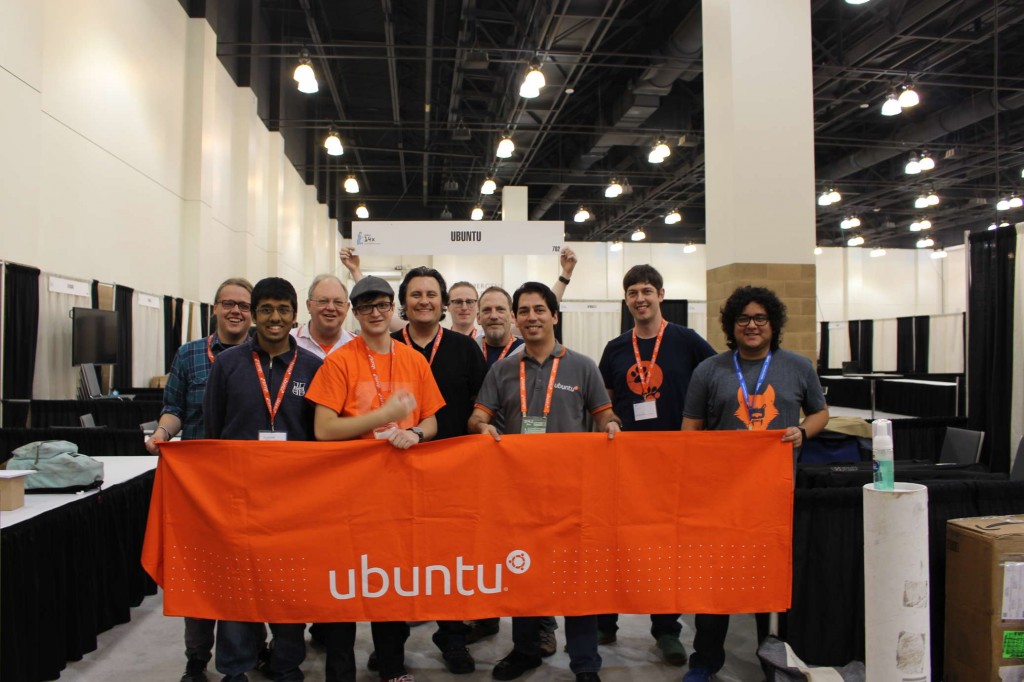 The Ubuntu booth was incredibly popular and we were glad both the LoCo team and Canonical employees were there all the time. Many seemed to like that we showed off a bigger variety of systems running Ubuntu: the Erle Spider, the convergence features of the phone (on a Nexus 4), the orange box, a gaming box and all the other devices we showcased.

One downer was that for quite a while the proxy cache for archive.ubuntu.com was broken, so some demos or workshops had to work around that. We took a few notes and will discuss ideas with the organisers, so we can make future UbuCons and UbuCon Summits even better.

In general the feedback about our presence at SCaLe14x and the UbuCon Summit there was overly positive and there were attempts to talk us into committing to the same next year already. :-)