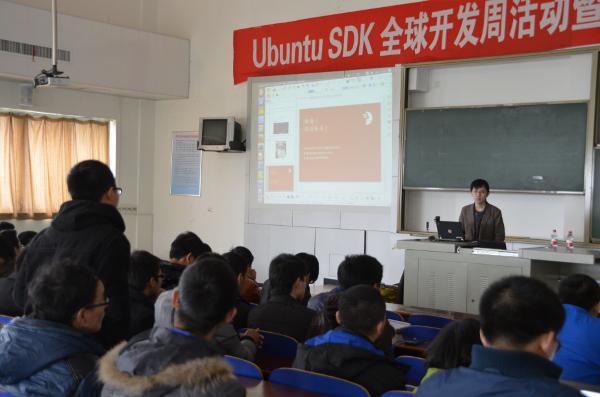 The last weeks have been very exciting. New features have been added to the SDK (among other things these things were added: cross-compiling through ‘click chroot’ support, running the click reviewers tools automatically), HTML5 support was improved a lot (update to Cordova 3.4, new JavaScript APIs surfaced and many other great things) and new docs went up on developer.ubuntu.com as well. To me it feels like it’s getting easier and easier to write great apps every day. The choice of technology is sound (enables app authors very quickly), the design choices are both beautiful and consistent and the technology around it (packaging and publishing is so fast and easy!) just takes care of so many things for you.

It will be great to see more and more apps for Ubuntu coming in soon, and it will be especially fantastic since all of them are going to work on all current and future form-factors, being written in the same code.

What I was really happy to be involved with was our push for Ubuntu Apps in China. For the Ubuntu App Showdown (which is still running for around 3.5 weeks, until 9th April) we added a prize category for Chinese apps, which became the starting point for other activities.

I’m super happy we have a diverse judges for the Ubuntu App Showdown. Jack Yu from Ubuntu Kylin, Joey Chan from the Ubuntu Core Apps team and Shuduo Sang from the PES team at Canonical. All of them have helped with lots of different questions and bits of organisation. Thanks a lot for your help!

We had a fantastic Ubuntu App Developer Week some two weeks ago, and while having the videos on YouTube works great for a lot of us, it’s not the best choice for China. Thanks a lot Shuduo for uploading all of the videos to youku.

This means that if you’re in China, you can just go ahead and get all the video goodness from there and learn all about Ubuntu App Development.

I’m very grateful for all the help from the people at Ubuntu Kylin.

In no time they invited Joey Chan (who has worked on the RSS Reader Core App, among others) to give a talk at the NUDT university in Chansha. The event was well-attended and well-received - around 100 Ubuntu enthusiasts turned up and Joey explained about Ubuntu for phones and using QML to write apps.

More events are planned, so stayed tuned for more news there. China was one of the first LoCos to have Ubuntu App Dev School events! :-)

The Ubuntu Community in China was super helpful in translating an initial set of developer documentation up at developer.ubuntu.com/zh. Translations, peer review and getting the docs online was done in just a couple of days, which is just fantastic. Right now we are looking at translating more content, which should make translations a lot easier. Thanks a lot everyone!

If you have more ideas for what we could do for Ubuntu apps being more interesting to and in China, get in touch with me.

If you are into writing apps yourself, there is still 3.5 weeks to get into the Ubuntu App Showdown. What you have to do is simple: