Ubuntu Core on the Nexus 7 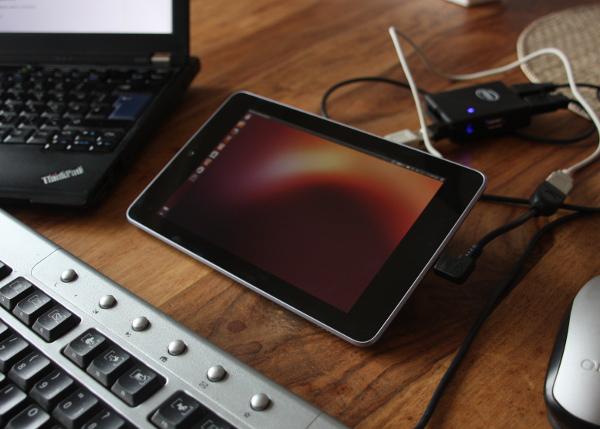 There was lots of buzz around Ubuntu on the Nexus 7 and I was lucky enough to get my hands on a Nexus 7 myself, so I had to try out getting Ubuntu on it. The instructions were incredibly clear and everything worked just perfectly. I couldn’t believe how quickly the the Nexus 7 booted into a standard Ubuntu Desktop.

When I started to play around with it, I noticed how much of the vision which shaped Ubuntu in the last years works really well on such a small device. Unity is great, the Ubuntu font looks very crisp, the touch gestures, etc. It was a pleasure to see this and play around with it. Naturally I ran into a couple of issues, which was totally expected. We want to know what these issues are and want to work on them to make Ubuntu ready for ranges of hardware. It was great to see that almost every issue I noticed was filed as a bug report already and the most pressing ones have assignees already.

When I decided to dive into it some more, I was glad I had a a Micro USB Host Cable (OTG Cable) and the small USB hub, Intel gave to UDS participants. I was all set to use the tablet as a small computer. Awesome. (To everyone who has hacked on small devices before, this might be boring - I found it quite exciting to be honest. ;-))

The current image uses 12.10 plus some patches, but it will soon move over to the 13.04 development release, where we can see bug fixes in a more immediate fashion and benefit from all the new goodness which goes into Ubuntu. Expect an announcement of the move to ‘raring’ very very soon.

This effort is a fantastic opportunity for Ubuntu, as we can all look at one reference device and fix whatever needs fixing and let Ubuntu benefit as a whole. If you think this is a worthwhile project, you can help out. What is most needed right now is people who help test the device, report bugs, triage the list of bugs, forward them to the upstream projects if necessary. If you know how to debug memory consumption and how to improve it, you’d be a great fit for the team as well. Please join #ubuntu-arm on irc.freenode.net and talk to the folks in there.

Our documentation is up at https://wiki.ubuntu.com/Nexus7 and there soon will be more meetings, more announces and more chances to get involved. These are exciting times.

For the 13.04 cycle a team of people got together to make sure that the standard Ubuntu Desktop works great on the Nexus 7 device. This is a great opportunity for Ubuntu as we can all refer to one device and one chipset and make sure that Ubuntu is capable of dealing with the device. This will lay the foundations for making Ubuntu ready on many other devices. The team meets on the 16th November 2012, 16:00 UTC in #ubuntu-meeting.