The Desktop Team has been kicking ass lately. Over the coming weeks we’ll introduce some key members of the team to you. We’ll start off with security master and king of language-packs Martin Pitt.

When did you join the Ubuntu Desktop Team or for how long have you been involved with Ubuntu?

I started working for Canonical in August 2004, literally only days after finishing my uni diploma. Besides adopting the security chair, I almost instantly fell in love with the Utopia project and thus worked on handling of hotpluggable devices in the Gnome desktop.

How did you get involved there?

I think this was rather accidental :-). I got an USB stick at that time and wondered how to make support for those fully automatic and painless. At the same time I worked on improving the security of HAL, the daemon that keeps track of all hardware changes. From then on it was only a tiny step to working on the desktop side as well.

What have you been working on since then?

I do not work on the actual “front-end” applications, but rather care about various parts of plumbing underneath it: language packs and other internationalization, automatic problem feedback (https://wiki.ubuntu.com/Apport), granny-friendly handling of restricted device drivers, and lots of small things and bug fixes.

The first and foremost requirement for a new contributor is having an idea what he is interested in doing. Free Software development is about fun and collaboration, and thus you should be passionate about the things you are going to tackle and find the right people and teams to work in. Getting to know those teams as well as the established procedures is taking time, of course, so you should start with bitesize things and grow, instead of despairing on a huge project which you start right away.

What do you want to work on next?

I need to fix some things in the recently established automatic duplicate detection in apport, improve the workflow and privacy of crash bugs, do some improvements for restricted-manager, and manage the release of Tribe-2.

As a user I like the focus on usability, simplicity, and predictability (release cycles and lifetime). I can finally recommend this to some less tech savvy friends as well as to users in a commercial environment.

As a developer I enjoy the open, friendly, and motivated community, and I am proud to be part of it. Over the years we found behaviours and processes which make it relatively easy and encouraging to start working on Ubuntu without compromising on the quality of the core parts.

What would you like to see improved in Ubuntu?

In the following releases until the next LTS I would like to draw more focus on QA and bug fixing and slow down feature development. We still have way too many bugs, some really important ones are outstanding for years already.

How does your virtual desktop and your real desktop look like? 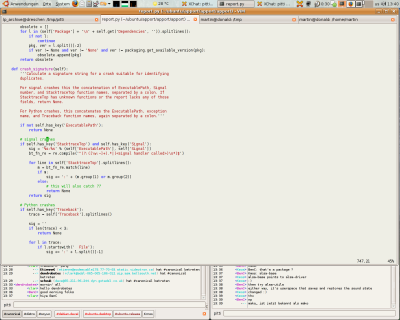 Real: I abhor paper and strive to keep everything in electronic form, so my desk usually only contains food (water, juice, sweets, breakfast, etc.)

What do you do in your free time?

I have done Taekwondo for some years, enjoy biking, table tennis, and hiking. But of course I spend a lot of what could be called “free time” on the computer as well, mainly on Debian projects (PostgreSQL mainly). Since someone posted that “top 8 Linux games” blog, I actually started playing games again, right now “Battle of Wesnoth”.

Douglas Adams, a truly amazing guy. And Ken Follet, you just can’t stop reading a book from him.

Ugh, nothing spontaneous at the moment, I’m afraid.