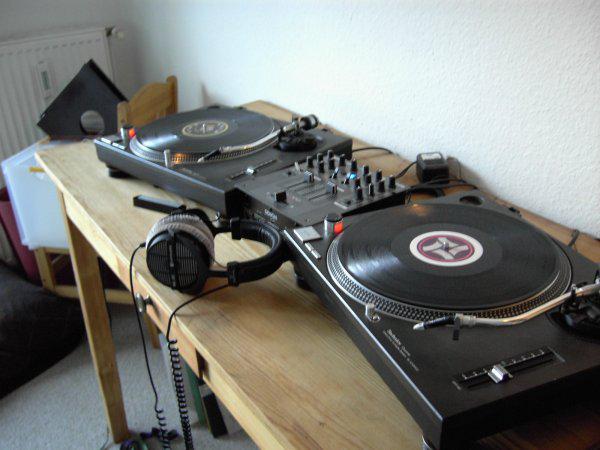 Last night I played (as a DJ) in a club for the first time in my life. It was bloody brilliant.

L.U.X., the venue is a cozy place with a nice atmosphere. Some weeks ago I asked the owner if I could play there and he pointed me to the organizer of Drum’n’Bass parties at his place. Michal, a friendly, dreadlocked Drum’n’Bass fanatic didn’t ask many questions but said “Sure, how about in two weeks?”, unfortunately that was the time, when I had to leave to UDS Mountain View and to Canonical’s Allhands conference. During a presentation at Allhands, Michal called me on my mobile and was was surprised to reach me on the other end of the world. He asked me if I’d like to play on Dec 1st. What I liked very much about him is that he didn’t ask much about me, what I was going to play or where I played before. He just trusted me to do the right thing. Of course I said “Yes.”

Around two weeks later, I was a bit nervous throughout the day and wondered what I was going to play. I arrived at 22:00 at L.U.X. and brought around 30 kilos of records with me (at least that how it felt to me). At around 12 I started to play and was bloody nervous. Hands trembling, I played “Losing Ground” by St. Cal (Soul:R 018), a smooth and mellow tune with a nice bassline. My nervousness wasn’t helped by the fact that the headphones didn’t work, I could only hear a faint clicking sound, which vaguely resembled the drum loop of second track (“Prophecy” by SKC & Bratwa (Soul:R 012)) I was going to play. Knowing that I had to do something, I did something I tried before: mixing without headphones. The nice thing about vinyl records is, that once you put a needle on the record, you can even without loudspeakers hear the sound of the track. Clicking and smashing sounds are accentuated, so hihats and snares are easy to hear out. The crossover between the two songs worked nicely and midway through the second tune I finally had working headphones. I was still bloody nervous but played my way through more Soul:R and Revolve:R records (mostly Calibre and Marcus Intalex tunes). People were nodding their heads to the music and started to move! YAY! Next up was “Just a little Herb” by Mist:ical (Soul:R 020) - that’s where I started to play more of the dubby tunes: Lion Dubs, Visionary tunes, and so on. Finally people freaked out, when I played “Lightning” by Visionary feat. Jenna Anderson (Hustling Beats 004) - it was only topped by “Soul Patrol (Sunny Side Up Mix)” by Total Science & MC Conrad (CIA 033).

Seeing people dance to the music I played was a great experience. I had an erection over one and a half hours, I’m glad nobody could see it when I was behind the decks. Ok, you’re right. I’m lying, but during all the time I realized for how long I had wanted to do this and how good it felt.

I very much appreciated how many friends showed up there: Thomas, my brother and his friend Jan, Nina Feyh, Ellen Reitmayr, Daniel Elstner bringing Fuchs and Klaus and Scott Wheeler who brought half his company along.

My brother made a bunch of pictures, which he’ll hopefully have online soon (once he’s awake again). There are some new events coming on, I’ll let you know where I’ll play next time. :-)

Only downside to this evening was I somehow managed to come home with a headache from hell (and I didn’t drink a drop of alcohol), which is the reason why I’m awake now.

Anyways, I’m quite sure now I found the right hobby.

(Update: All in all, I played for around two hours and I managed to screw only two crossovers between tracks, but only in very subtle ways, I doubt it disturbed anybody. It probably should have recorded it.)