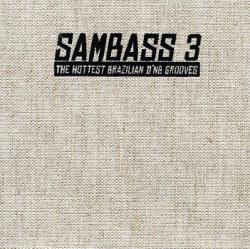 It was just unfair: after looking forward to a show of Brazilian Drum’n’Bass DJs, I was tortured by the head ache of Doom on Friday. Matthias ‘doko’ Klose insisted on going out for something to eat and have a drink - it was a good idea. The food at the Greek place (somewhere around Bergmanstraße) was very good and the Cocktail bar was crowded by 16 year old (at least it seemed so), but it was fun.

So I brought home Murphy at 0:30 - I felt like partying and the head ache was nearly gone. I went to SO 36. I instantly liked the place and the music was simply brilliant. The DJ and MC were from Brazil and had brought a huge lot of Brazilian people with them, who were dancing and singing like mad - the atmosphere was great. A good way to measure this was the amount of people who were not dancing, but staring at the (historic) soccer scenes, which were projected at the wall: nearly nobody. :-)

A personal highlight of the evening was, when the DJ played

Both records seem to be out of stock wherever I look. If you happen to have one of them in good condition (Vinyl) and what to do do something good to me, grew bored of the record or need the money, please let me know.